In 2006, few people outside of the derivatives market had used the word “credit default swap” in casual conversation. By 2008, it had become an inescapable household term. People continue to throw around buzz words gleaned from the pink pages of the FT, but as my colleague, Daniel Indiviglio recently asked: Does anyone out there really understand what the Over-The-Counter (OTC) Derivatives market is? Since I consider myself the resident derivatives wonk at Atlantic Business, I felt compelled to respond. But rather than focus on any particular instrument or issue, I thought it would be best to focus on the overall structure of the market – who the people in the market are, what they do, and what relationships they have to each other – and leave the banker-bashing to someone else.

If you were to base your understanding of financial markets on your experiences as a consumer of financial products, you would probably think that any and all types of financial products are available upon demand – all you need to do is pay for them, right? No. The reason you can purchase stocks over the internet with a few clicks of the mouse is because at the other end of that trade is someone else willing to assume the exact opposite end of the trade. If you want to buy, they’re willing to sell. If you want to sell, they’re willing to buy. The folks that do this are known as market-makers. Simply put, their willingness to both buy and sell assets creates a market in which others can trade these assets.

Liquidity risk is the risk that you won’t be able to sell an asset, or more generally unwind a trade, for an amount of cash close to its expected value at any given moment. So which assets carry the most liquidity risk? As a general rule, the greatest liquidity risk comes from assets in thinly traded markets. That is, the fewer times an asset is traded on any given day, the greater the liquidity risk. For example, stock in Coca Cola carries much less liquidity risk than a Victorian mansion for the simple reason that Coca Cola stock is heavily traded every business day all over the world. As a result, Coca Cola stock trades can be executed quickly through intermediaries who are willing to buy it from or sell it to you, since these intermediaries know that at some point in the near future, someone else will show up at their door asking to buy or sell some more. So these market-makers must be the greatest people on the Earth, willing to devote their time to make markets liquid, all for the greater good of humanity, right? No.  You bought your lunch, even if you don’t remember paying for it. In exchange for providing liquidity, market-makers get to pocket the difference between the prices at which they buy and sell.

A swap is a very common type of OTC derivative, which includes that destroyer of economies, the credit default swap (CDS). While industry folk commonly speak of a buy-side and a sell-side to the swap market, you can’t really buy or sell a swap in the classic sense, since a swap is an instrument in which both sides have obligations to perform in the future. That is, if the underlying rate moves against either party, that party will have to pay up, much like a future or forward contract. This is in contrast to an option from the perspective of its holder. An option grants the right, not the obligation, to the option holder to buy a particular asset; and creates an obligation on the part of the option writer to sell that asset. You can sell a right and assume an obligation. You cannot sell an obligation. Well, there are probably a few bozos out there. But in any case, both parties to a swap could end up having an obligation to pay at some point in the future.

Swap dealers are market-makers for swaps: the sell-side of the market. But how do they create markets when you can’t really buy or sell a swap? At all times except execution, swaps have positive value to one of the parties to the swap and negative value to the other. At execution, the market value of the swap to each side of the swap is zero.  This is because the price of the swap will be based upon the value of some rate at execution. One party will be long on the rate (benefiting if the rate goes up) and the other will be short on the rate (benefiting if the rate goes down). After execution, that rate will move, up or down, which will create value to one of the parties. What swap dealers do to net their positions is offset their long positions with short positions; and offset their short positions with long positions. In reality, this process is not so simple. The face value of each trade, known as the notional amount, is not likely to match up so perfectly with the other trades, despite being executed by masters of the universe. As a result, they have to work pretty hard to make all of their trades match up.

So who is out there using these swaps aside from those evil useless bankers? Well, I’m sorry to disappoint you, but pretty much everyone: corporations of every variety, particularly heavy consumers of energy products, municipalities of every variety, and of course, hedge funds. There are others, like insurers, who have played a now infamous role in the OTC derivatives market, but the preceding list, while not exhaustive, at least provides some insight into the broad variety of market participants out there using these weapons of mass financial destruction.

So why do these firms voluntarily use these evil, destructive, terrible things which will inevitably cause them to suffer? Well, it’s not original sin. It’s because firms that engage in various types of economic activities have natural exposure to various types of risk. And swaps get traded on pretty much every type of rate you can think of. There are the typical and fairly well known swaps like credit default swaps, which are priced against credit spreads; interest rate swaps, which are priced against interest rate spreads; FX and currency swaps, which are priced against currency spreads; and then there are less well known swaps such as energy, weather, and catastrophe swaps, each priced against their own respective spreads. Liquidity varies across these different categories, for the same reasons outlined above: some are less commonly traded than others. Some swaps, known as bespoke swaps, are never traded at all. They are custom tailored trades designed to hedge the risks of specific parties.

So how do these rates correspond to risk? Taking a position on a given rate, long or short, allows you to assume the risk that the rate will move. If you’re naturally exposed to increasing energy prices, taking a long position on a swap keyed to some energy rate, say the price of oil, will allow you to cash in when the price of oil moves up. Because your business loses money when oil prices go up, the net effect of your business losses and your swap gains are zero, if it’s done right. And what if the price of oil goes down? Then your business does well and your swap does not. Again, if that’s done right, your net position is zero with respect to the price of oil. This lets you forget about the price of oil and focus on your business activities. So who takes up the other end of the trade? Even if a dealer takes on the short position in our example, the dealer will usually find someone else who wants to take the short position of the trade and pass the exposure onto them. So why would this other party want to short the price of oil? There are a number of reasons. They could have the exact opposite business problem that you have, and lose money when the price of oil goes down. Or, they could be one of those evil speculators. Yes, speculators serve a bona fide economic function and actually help make markets more liquid.  Again, sorry to disappoint.

Dealers rely on each other to supply liquidity to the OTC market. That is, as mentioned above, it is unlikely that any one dealer’s clients will demand a perfectly balanced set of products. As a result, dealers rely heavily on their ability to trade with each other, and smooth over any imbalances in their books. And because of this heavy inter-dealer trading, swap markets have a lot of inter-dealer credit risk, which means that dealers are exposed to the risk that another dealer will default. In general, counterparty risk, which is the risk that the party you’re trading with won’t pay as promised, is of paramount concern in the swap market. The general market practice is and has been to require your counterparty to post collateral based on daily mark-to-market valuation against the relevant spread. But dealers are so important to the market and their positions are so large that even well-collateralized positions that fail to payout in full can have disruptive, even devastating effects. As a result, a central counterparty (CCP) has been set up, which acts as a heavily capitalized hub through which trades are channeled, and most importantly, netted against each other. Right now, there is only one CCP and it is dedicated to a subset of the CDS market. Other CCPs may very well follow. For more on CCPs, go here.

The image below, which does not take into account any CCP, provides an overall graphical representation of the OTC swap market, with dealers performing the classic bank-style role of intermediary between end-users of financial products. 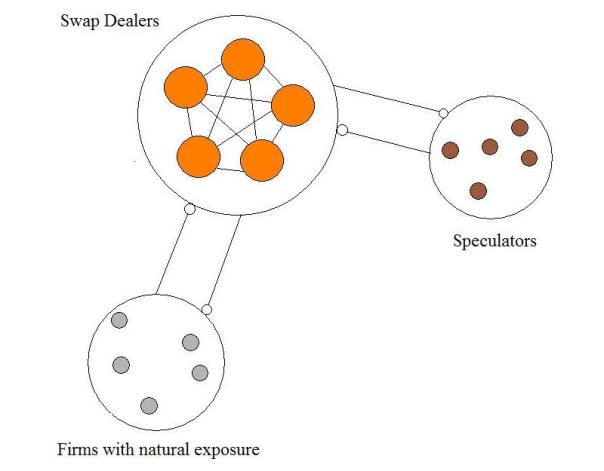 One thing you should notice about the image above is that the swap market connects otherwise disparate parties in the financial system. This has the beneficial effect of providing each with the risk profiles they desire. But it also has the effect of causing the entire system to assume the credit worthiness of the entire system. In other words, as I mentioned above, swaps create exposure to counterparty risk, which is in essence credit risk. One of the obvious-in-hindsight lessons of this crisis is that counterparty risk is highly correlated to macroeconomic credit risk. That sounds fancy and deep, but really it’s just restating the obvious: counterparty risk is a type of credit risk, and so, as the overall risk of default rises, so does the risk of counterparty default. This means that CDS protection sellers are least likely to payout at the very moment they’re obligated to: upon someone else’s default. That said, the OTC derivatives market – the CDS market in particular – has done a simply incredible job of maintaining functionality through even the worst parts of this crisis and has adapted quickly to increase liquidity and administrative efficiency. While those outside the industry seem convinced there’s some kind of trillion-dollar ruse going on, that is certainly not the case. The OTC derivatives market is an invaluable and remarkably sophisticated market that adds real value to the financial markets and the world’s economies. Without it, our lunch will get a lot more expensive.